I’ve been 40 for six months! Yesterday was my half birthday.

We have to blame Sojo and Sam for this whole half birthday thing. They are the ones who introduced me to the concept, and it took a few years before I actually paid attention to the calendar and remembered my own. But this year, finally, I did, and so happy half birthday to me!

Some days it seems I haven’t accomplished much this year, but as I sit and reflect, I have to admit that’s impatience talking.

I’ve gotten new opportunities at work and landed some interesting freelance contracts. I’ve made strides in my creative projects and midway between my birthday and my half birthday…

I got engaged. *shimmies*

It’s been a fun year thus far. My only regret is not documenting more of it. I’ve been writing morning pages and journaling semi-regularly, but I can do more to record this chapter of my life. In anticipation of the next six months, I plan to write a letter to myself to arrive on my 41st birthday.

There’s always a balance to strike between living life and writing about it, but inspired by Pearl Cleage’s work, I want to maintain the one, increase the other, and enjoy the hell out of both.

Cheers to life and love and all that jazz. And happy (half) birthday to me!

I’m reading The Year of Magical Thinking by Joan Didion. It’s wonderfully written, yet halfway in, I’m not sure I like the book. Well, the book I like. It’s my relationship to the book that puts me ill at ease.

I came to the book from several sources.

One. A mentor/advisor recommended it once she discovered my renewed interest in journalism and creative writing. She spoke highly of the author in general and this book in particular, so I added to my ever-growing List of Books to Read.

Two. Every now and again I review the list of Pulitzer Prize winners and add them to the similarly growing, often overlapping List of Writers to Know.

Three. Pearl Cleage’s newest book arrived amidst much fanfare, and more than once I saw Joan Didion’s name referenced as a peer. As in, this book is autobiographical/confessional and brings to mind other well-read writers like Joan Didion.

Four. In the aforementioned book, Pearl notes Joan’s work (although not this offering – it hadn’t been written at the time). As it was already on two Lists, and her name was becoming a steady fixture in my consciousness, I finally ordered it. 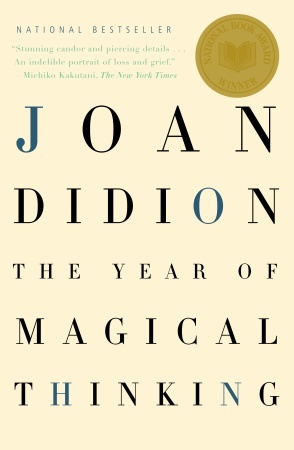 So, the book…The very first page compels. Yet soon thereafter, I’m repelled. She’s exploring her husband’s sudden death, and it’s so well done, I feel it.

Having experienced my mother’s death up close (albeit 11 years ago), much of what she wrote hit notes I wasn’t prepared to experience. The circumstances and the relationship were different, but the trauma and the grief remain true.

I put it down for a day or so.

I picked it up again and found myself, at turns, congratulating myself and questioning the book. Congratulations because I saw whispers of my writing style in hers, and I thought this might be a good mentor text for professional development. Questions because, unlike Pearl’s book which seemed to edify and affirm something in me, Joan’s book felt more… I hesitate to say it… self-serving?

I believe in the power of storytelling, yet something about this storytelling seems to serve the teller. Which is an interesting critique given my praise of Pearl as her journals were originally meant to serve herself. Pearl didn’t write them to publish them. She wrote them to reflect. I don’t know if Joan set out to document this period in her life so she could publish it, or decided later on the story could be valuable. It certainly can be. I’m sure it has been.

To be fair, I’m at the halfway point. And maybe the crux of my resistance is the emotion. Because her writing is so clear, because she lets you inside the black box, you know and witness and feel everything. Which is good writing, great writing, but a bad feeling if that’s not the feeling you want.

So I have mixed feelings. I like the book, but I don’t love it. I do plan to finish reading it.

Did you read it? What did you think of it?

I’m 2/3s of the way done with Pearl’s book. I’ve been on a first name basis with her since I began this journey.

Reading it makes me wonder how much wisdom gets lost because women don’t share their most intimate thoughts? Either aloud or in writing? Many of us live our lives, and simply figure out the hard shit as we go along.

Some read the self-help gurus say, and I’m sure there’s plenty of insight to be gained by doing so. Others bond and grow through occasional talks with a close friend.

But how many of us engage in a systematic effort to document (your real) life and the lessons it teaches you? Either for your own reflection and edification or for the express purpose of passing it on? If we are not the keepers of our stories, who should be? When our stories fade, our wit and wisdom fade also.

I’ve written before about questions I’d love to ask but can’t. There’s also this about the importance of family narrative. There’s so much learning to be gained in the living of life, yes, and eve more so in the telling and retelling of it.

Do you document your life? Why or why not? How do you or how would you if you started today? The rain is tapping a sleepy rhythm outside, and I’ve been fighting sleep (I lost one battle) throughout the day. April showers bring May flowers and all that, but I can’t help but wish for warmer temps to help cheer the gray days.

Minutes ago I received my copy of Pearl Cleage’s latest, Things I should Have Told My Daughter. Although I generally prefer fiction, I‘m excited to read this book. I don’t claim to be a fan of many folks, but I’ve appreciated Pearl’s wit and wisdom for years.

I’ll share salient points as I come to them.

From Joshunda’s interview with Pearl Cleage:

A dual history of bias and internalized oppression has kept most black women from publishing their memoirs or journals, Cleage adds, for fear of emotional and economic reprisals. “After slavery ended, black women continued to put forward the idea that we were good, sexually responsible women, going up against the racist stereotypes that came out of the madness of slavery,” Cleage says. “But there was still the fear of being too honest around white people. I don’t feel that’s a legitimate feeling for me. I’m going to tell the truth to whoever is in the room.”

When I read truth, I feel courageous and emboldened. Powerful. Magical. Writing the truth, however, is altogether different. But when I do, that’s when folks nod. Say, I felt that. I needed that. I never knew that. Amen.

From Joshunda: Cleage says she drew her inspiration for the book from the diaries of Anaïs Nin, which she found liberating and inspirational, much like the work of Walker and Shange.

Sounds familiar.  Truth is hard to come by in the pages of books, although I must admit I wasn’t exactly searching for it as a younger woman. Discovering it, though, was quite a revelation. Filling. There was that magic, that power I didn’t know I sought. Reading it encouraged me to write it, yet in the beginning I found it hard to lay truths on the page. They were there, but buried. Hidden in metaphor and verse. Rarely plainspoken and clear.

It’s also slow at times, truth-telling is. Because there’s this contextualizing you have to do. Background building. Setting the stage and what have you.

And then there’s the crafting. Are you conveying what you really mean to say? Who might be hurt? Who might feel misrepresented? Are you true to you?

I did not want to be the traitor,  the teller of family secrets – and yet I wanted to be a writer. ~bell hooks

Once you’ve framed it and crafted it, then there’s the time set aside for doubting. Is it too much? Who are you to give voice to this experience? And on it goes.

Until finally you shout, or whisper, “Me, dammit! It’s my truth. I’m telling it!” And you press send or publish as the case may be, and try to move on to the next thing without agonizing so much on the last thing.

And perhaps over time it gets easier. I dunno.

I do know it’s always a digging in. A meditation. A labor of love. Truth-telling is.

It’s freeing for truth and for the one who told it.

It’s difficult. But perhaps no more difficult than any other act of love.

The ladies of Whiskey, Wine and Moonshine have books on the brain. We may share some of our recent convos on an upcoming podcast. In the meantime, I want to know your thoughts about books. For all questions, you can choose more than one.

It’s probably not fair of me to ask these questions without sharing some of the answers, and I may reveal my thoughts in a future post.  For now I want to hear from you! The floor is yours… Judy Blume holds a place of honor in my childhood. She was far and away my favorite author, and if I didn’t read all of her books growing up, it wasn’t from lack of effort.

Although she was firmly number one, I loved many books by many writers. Philip Hall Likes Me. I Reckon Maybe. Danny, the Champion of the World and Cheaper by the Dozen, were among the novels I read countless times. Some of my favorites still grace my bookshelves even now – either the original copies I read growing up, or new copies I bought as an elementary school teacher.

My most cherished memories of teaching 4th grade include reading great books aloud to my students, engaging them in novel studies, or helping them make their way through their first truly satisfying reads. I just love young adult and juvenile literature.

After I stopped teaching, I became a full-time graduate student. My days and nights were filled with nonfiction. The required readings never grabbed me like a good novel, and I often lamented the lack of time to read one. I had to squeeze in novels during semester breaks as treats (I’m looking at YOU Harry Potter books).

Although adult fiction is sometimes hilarious, delicious or otherwise moving (32 Candles, I Wish I Had a Red Dress, The Bluest Eye, Their Eyes Were Watching God), I don’t think there’s anything quite like good children’s literature.

I’d like to read all the award-winning books from 2014 for starters, and (eventually) make my way through the Caldecott, Newbery, Coretta Scott King and Lee & Low New Voices lists.

But some great books don’t win awards, and here’s where you come in… What’s on your list of must-reads? Novels and picture books welcomed!