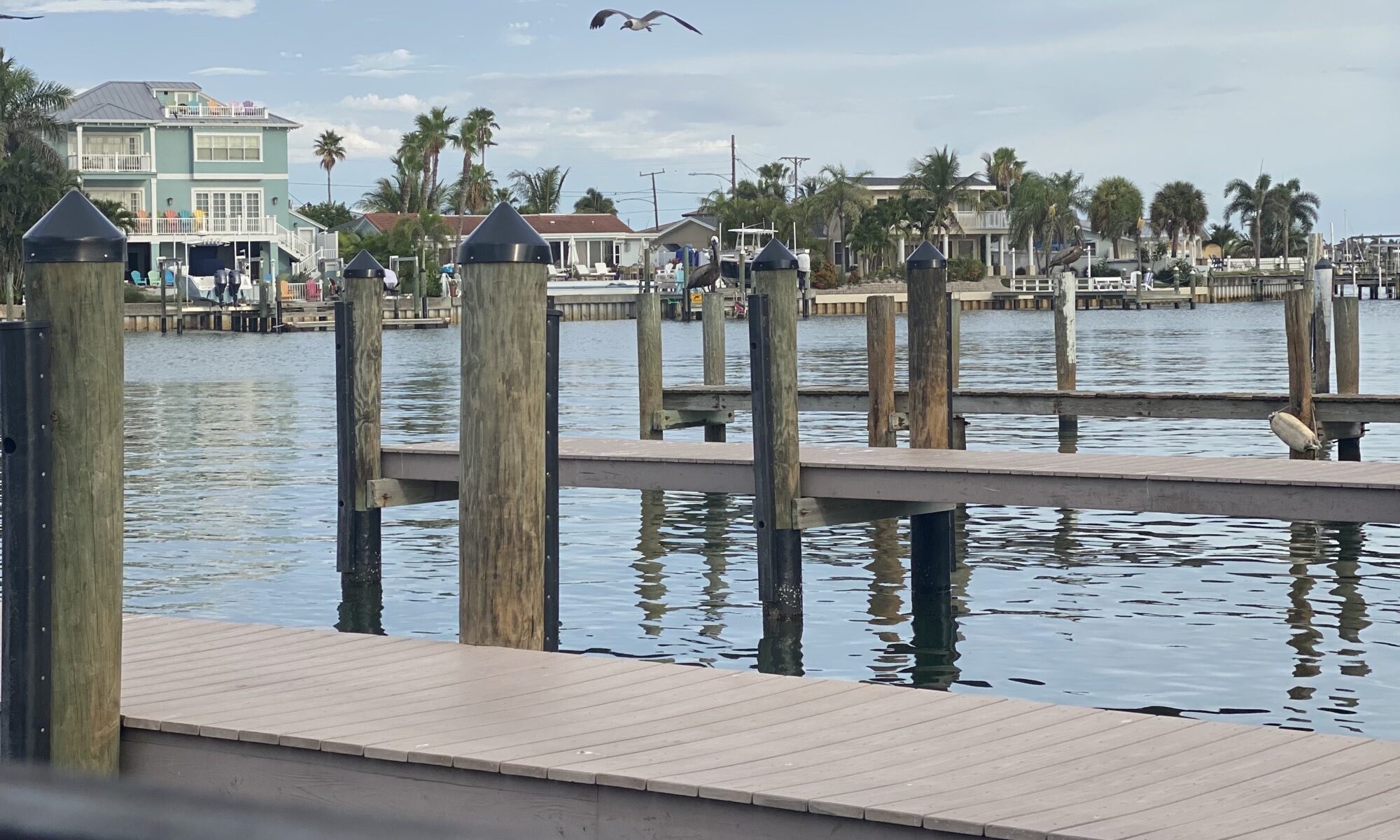 Sam answered on the second ring.

“Why hello there,” his familiar voice rang out. Still warm, still friendly, but softer, frailer than I remembered.

“You’re coming back.” It wasn’t a question. I giggled to myself at the quiet sureness.

“Well, when you left, you said you’d return, you just didn’t know exactly when.”

I smiled at his recollection. At the truth of it.

It’s been nine years since I left St. Pete for Atlanta. Even though I’d only lived there a couple of years, St. Pete is the only place I’ve truly felt “home.”

When I departed in 2013, I was excited to leave, to start a new life in my old state. But I told folks on both sides of the GA/FL line, that I’d return to the sunshine state one day.

At first, I actively counted down the years until we could go back. But eventually, I found myself in a groove, no longer X-ing days off my calendar.

Sooner than I expected, opportunity and circumstance coincided, and we decided that the time was now.

So here we are, surrounded by boxes and tape and markers, finalizing all the things one must make final before picking up a life and moving it elsewhere.

In just over two weeks, we’ll be making our way back to the land of sun.

We sat in a circle. Maybe there were 15-20 of us, I’m not sure. But there we were, all sitting crossed-legged in a circle on stained, graying berber. We ranged in age from maybe 6 or 7 to perhaps 11 or 12 and it was one of the many games we played at the nursery center after school.

We called it Pass it Down, but you might know it as Telephone. The chosen person began by whispering a word, phrase or sentence into a nearby ear. The owner of that ear “passed it down,” and relayed the message to the next person. And on it went around the circle until the message got back to the originator.

“That’s not what I said!” was the originator’s oft-heard reply. Whatever word or words were passed down were distorted by the time they got through everyone. He said, she said, and apparently almost everyone said or heard it wrong.

It’s a game, but sometimes versions of it happen in real life, too. Notably, in politics. Something happens and folks “hear the message” and get all up in arms about what they think the message is, when what they heard (or read via social media) is a word or phrase or sentence removed from the truth.

Today, the FAMU Board of Trustees had an “emergency called meeting” to discuss the FAMU-FSU college of engineering.  The Chair, Solomon Bader, released a statement which read, in part,

We are aware of an amendment filed on Tuesday evening by Senator John Thrasher that would create a second college of engineering in Tallahassee at Florida State University.

The statement was cause for alarm for those who support the FAMU-FSU College of Engineering – a joint venture between the two universities. The college was founded in 1983 and shares resources including facilities and professors. Students can attend either Florida A&M University or Florida State University and take classes at the college.

I wanted to know what Senator Thrasher’s amendment actually said, so I went searching.

I found out Senator Thrasher’s amendment did not create a second college of engineering. Instead, it added $3 million to the proposed Senate Budget (See SB 2500) which already provided $10 million of capital outlay to “FSU – College of Engineering.” The amendment did not “create” a second college, but it added additional funding to a new college. A previously non-existent FSU College of Engineering is listed in the proposed budget, and there is no accompanying narrative to explain the capital outlay.

Some are calling for pressure on Senator Thrasher. I’m not sure what that can accomplish. After all, the Senate has already voted on the measure in question. Others are lamenting it’s over and nothing else can be done. The new FSU College of Engineering is on its way. But this fatalistic approach ignores the conference that must occur to reconcile the bills, and any additional steps required to approve a new program.

Whether you support or oppose an FSU College of Engineering, it’s time to do your own research and stop playing Telephone with politics.

On Friday, March 21, 2014, Florida A&M University (FAMU) inked a deal with the nation’s only Black-owned cable news network. The newly established Black Television News Channel (BTNC) will be managed and operated from FAMU’s School of Journalism and Graphic Communication (SJGC).

With the creation of the BTNC, founding partners Congressman J.C. Watts, Bob Brillante, Frank Watson and Steve Pruitt, plan to fill a void in the news industry. Over the past twenty years, 18 Black-owned and operated television stations have gone out of business. The result? A dearth of content for Black consumers.

Said Congressman Watts, “The world only gets a sliver of who the Black community is today. We look forward to telling that story.” FAMU, an HBCU (historically black college or university), was the ideal choice for the enterprise.

The station’s connection to SJGC will provide authentic industry training and mentorship for its journalism students. The agreement provides career counseling, internships and job placement as well.

Said SJGC Dean Dr. Ann W. Kimbrough, “We are excited about this visionary opportunity that connects our mission with that of the black television news channel’s goals. This is not a singular opportunity. We see it as a multidisciplinary opportunity for our students, alumni and faculty.”

The contract, which includes a partnership with Sony, provides $10 million to the university over 11 years, including renovations and equipment upgrades to house the new enterprise.

Watch video from the historic signing. Learn more about the BTNC here.

Take time to stop and smell the roses.

It’s an old sentiment, but one I’m thinking about as I fly home. I’m above the clouds now, and over my shoulder I spy the warming tones of the setting sun. 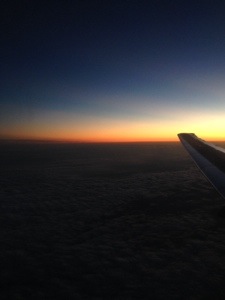 The sight made me want for Florida at first. But on second thought, what I’m missing is beauty. Winter’s cloudy, chilly mornings have kept me indoors on days I’d rather run.

Running outdoors is my meditation. My journal. It’s high fives to the rabbits who line the greenway, and smiles to the rising sun. It’s awe with flowers blooming in spring, leaves turning in autumn. It’s deep breaths in time with my feet – percussion behind a chorus of birds.

It’s been a while.

Sometimes my entire work day is spent in the bowels of a school. Cinder blocks obstruct the sun and the evergreens right along with cell service. “I’m in a bunker today,” I tell Blue.

The moments left before sunset are spent navigating Atlanta’s traffic. If you wait too late to hit 400 from 285, you might as well stay put another hour or two.

Despite an uncooperative schedule, it’s easy enough to experience beauty.

Seek and ye shall find.

I have arrived. Yesterday was a long day of last-minute packing, goodbye lunching and driving. We made it in the wee hours of the morning.

The movers unloaded my goods this afternoon. I sent the men away with a few items as I began purging more remnants of lives past. I grew up in this house, but I haven’t inhabited it in six years. I’ve not been here, but my stuff sure has been. Old closets filled with old stuff. I won’t feel at home in my old house, until I do some serious clearing.

And so it begins.

So I’m moving, that much is clear, but it seems the where to is a great deal muddier. The short answer is, back home. It’s second nature to call Atlanta home, since that’s where I was born and raised, but honestly, I feel funny about it. In the technical sense, it is or was home, but as I wrote in November:

What is home, exactly? A place or a moment that resonates. It’s gathering of old friends around a good game of Taboo. A visit to the tried and true corner barbershop one Saturday morning.  Sometimes home is less fleeting. It’s a city where sunshine runs rampant. A house you’ve built with your partner. Whenever, wherever your heart feels welcomed and your spirit feels at ease, is home.

Moments and people in Atlanta resonated that way, but as a city, Atlanta never felt like home. At the time I penned that post, I felt pulled to leave this place, despite the fact I am definitely home here. It seems I was in Tampa for a reason and a season, but not a lifetime; and here at the dawn of Spring, it’s time to make a new start in an old haunt.

A funny thing happened on the way to work. No, not really. But I needed a way to start today’s blog post, and, why not? Nothing to make you chuckle, but I did find today worthy of note…

As I drove through the more rural areas of Tampa Bay, I was greeted by canopy trees! If you’ve never spent time in Tallahassee, Florida, you may not be familiar with the canopy roads. These are long streets lined on either side by huge oaks dripping with Spanish moss. They hang over the roads like umbrellas, providing shade for the passing motorists. Canopies! And although the sight in Tampa Bay did not approach that glory, it was lovely to see the familiar splendor.

It reminded me of Tallahassee, yes, but also of St. Pete which has its own share of mossy oaks, and of my first love away from home – Savannah. Memories of Savannah summers are incomplete if they don’t include the endless sightings of Spanish moss. And just like that, I had fond memories of Georgia, and found myself looking forward (finally) to the move.