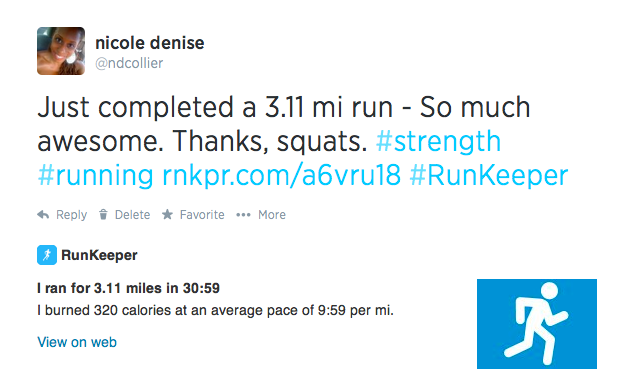 And it was a great run, too. I lifted weights yesterday, which means squats among another things. And although my legs started to feel it toward the end of today’s 3-miler, I really can tell the difference. I really love the difference.

I saw my two regulars today. I’ll call Ivan and Dan. I’ve never spoken to either of them except breathless good mornings or smiles or waves. They are both mustached men. Ivan bikes. Dan runs.

Ivan and I often arrive around the same time, which is interesting to me since I don’t have an official start time. But time and again, there we are. He pulls up in his Jeep, unloads his bike, straps on his helmet and rides off into the distance as I’m walking up to the start. We don’t see each other again until the next morning I’m out for a run.

Dan, on the other hand, doesn’t arrive when I do. Most of the time I go out for a stretch – anywhere from 1.5 to 2.5 miles – then I turn around and come back in. I’ll usually pass Dan on the home stretch. He’s a walker. His stride is an interesting cross between a brisk march and a stroll, all while his head tilts a bit to the right. In case I miss the gait, the mustache peeking underneath the army green baseball cap gives the game away. And sure enough, the hand juts out in greeting just as we pass.

A few mornings I’ve gone running much later than usual, only to find Dan on the home stretch while I was just starting. And the other day, I took such long rest breaks, Dan walked past me on the way and turned around and passed me again on the return.

I like seeing them. The regulars. The other day I recognized Ivan’s jeep approaching as I was preparing to turn on the main road leading to the Greenway. And when we both arrived, his wave was a little more vigorous than usual. It had been a few days since we saw each other.