She caught my eye and I couldn’t leave without her.

She’s not seen much daylight in recent years – perhaps none at all in the past three, even though I’ve had her since high school. My love affair with flute began after I was scheduled into band around 7th grade. I had been in chorus from elementary school and I did not appreciate the sudden switch. But we needed to be well-rounded, or so the school counselor said. And so band was my new elective. My protests fell on deaf ears as momma asked which instrument I planned to learn. When it became apparent that rolling my eyes nor begging would change her mind, I grumpily opted for flute.

The band director was impressed simply because it is notoriously difficult for beginning flautists to produce sound at all. But his simple suggestion – kiss the center of the mouthpiece and roll it down the bottom lip – was all I needed to hear.

So I played in our middle school band and loved it. We performed at assembly programs and at festival. Perhaps my favorite song at that time was Carol of the Bells.

There was something immensely satisfying in the way music resonated in the body when everyone played in tune. Simple chords made me smile. So much so, I recorded myself playing one part of a piece of music just so I could play another part and enjoy the harmony.

At some point tragedy struck when my flute was stolen. I cried and cried, grateful that my mother was able to replace it. “I thought you didn’t want to be in the band,” she said, eyebrow raised at the outpouring of emotion. No one, not even me, expected that bond.

My mother honored it and invested in it. Within a few days, a brand new, shiny Gemeinhardt took the place of the used, dented flute we’d all assumed would have a short life in our house.

In high school I continued practicing hours a day and eventually played as well as flautists who began lessons years before me. I became a first chair flute, out seating senior musicians as a freshman. Lest you think I was a prodigy of some sort, let me explain. Some of my fellow flautists played because they liked it or their parents wanted them to play, but not because they seriously enjoyed it. I loved it, so I happily invested the time. I never became expert at reading music, but I was decent. A good ear and muscle memory from repeated practices made it easy for me to the perform pieces Mr. Moody sometimes singled us out to play.

All in all it was one year in high school marching band, and four years in concert band. More assemblies, some community events, a few parades and annual band festivals. More joy.

For our high school graduation I played a short solo. I watched that video a few months ago. I can affirm, I was not a brilliant player by any stretch. But I loved it.

The Gemeinhardt traveled with me in college. I almost joined the FAMU flute choir, but I was a little intimidated to be honest, and more than a little busy with other extracurriculars. I played in my dorm room from time to time so I wouldn’t forget my favorite songs. And on it went that way for years. I moved here and there and my flute came with. I tried to break it out at least once a year, just for fun. But at some point in the past couple of years, I’ve stopped doing even that.

She’s been here a few days, and Saturday I had a few hours alone. I couldn’t shake the feeling to open the case and play a note. Even though I felt ridiculous, I did exactly that. Could I do it? Could I make a sound? Could I play a single note? A whole song?

Verdict: not quite like riding a bike but close.— nicole denise (@ndcollier) September 13, 2014

In other words, the going was a little wobbly, but it went. I tweeted my experience of rifling through my sheet music and trying my hand at some of the pieces with varying degrees of success. First Bernadette, and then Amanda chimed in. It was Amanda who proclaimed our group the Union of Rusty Flautists: 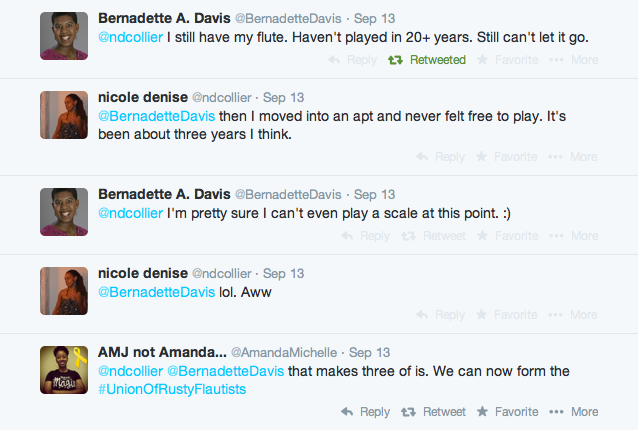 Rusty, yes. A few of those notes landed sans grace. Mostly because I was “remembering” how to read music, but also because something just sounded a little off. When I played two of the major scales that’s when I could really tell – one of my keys wouldn’t close properly. Poor B♭sounded sad and confused.

And that brings us to today…

I’m still not sure what’s pulling me to this flute, but there’s no enjoying it if I can’t play a basic note well. I found a music shop nearby and took it in.

“You have good timing,” the young man behind the counter smiled. “All of our instruments get serviced at a central location and the truck only comes on Tuesdays and Fridays. It’ll be here in about an hour.”

SGI Buddhists call this being in rhythm. Ha!

I’m hopeful it’ll an easy, quick and inexpensive fix. I bounced out of the store with a smile, excited for my flute. I have no idea how often (or how well) I’ll play it, but it’s nice to revisit and old joy.